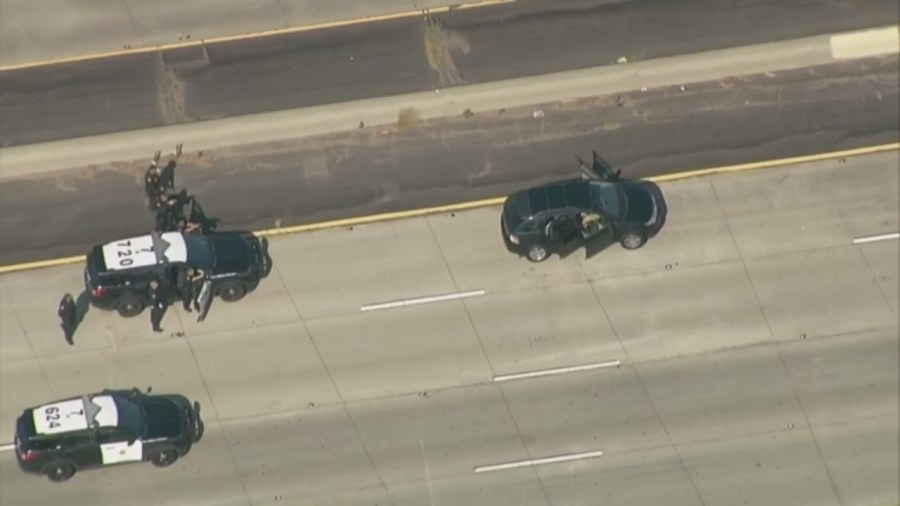 The chase began on the 11400 block of Carmel Mountain Road, where police began following a group in a Ford Edge suspected of robbing an Ulta Beauty store, according to the San Diego Police Department.

“Employees were given a very good description of the vehicle and a license plate, so officers set up on the highway to see if they could locate the car,” Lt. Adam Sharki told FOX 5 in an interview. “And the officers, along with the police helicopter, were able to locate that car on Highway 15.”

SkyFOX was at the scene when police stopped the car and a male driver got out and surrendered to officers. As he was being detained, the car took off abruptly and the police resumed pursuit.

The chase came to an end on Interstate 15 heading south near Interstate 8 in the Mission Valley area, where police last managed to stop the car. That’s when a woman got out of her car and started running, jumping over the I-15 barrier and wading through northbound traffic. The woman reached an embankment, where onlookers tried to stop her until several police officers managed to attack and detain her.

Ulta employees told FOX 5 that three women in hijab-like outfits stole perfume and left the store with the male getaway driver. Store employees say they were happy to hear the suspects were caught because these types of crimes happen every week.

The incident is still under investigation, according to the SDPD.

“There’s a whole other set of accusations against being a passenger as a driver,” Sharki said.

No injuries were reported by the police.

Discussing the Functions of Causal Conjunctions in Explanatory Texts

Bitch I Gotta Be A Great Villain Chapter 57 Sub Going