Vantablack is the blackest and darkest material ever, found in year 2014 ago . The world’s blackest material has just been discovered by a group of scientists, whose findings were published in a YouTube video posted March 4 yesterday.

This material is very black, so dark that laser light is directly absorbed by the material, In this article you will see the video.

Previously, some of you may have asked, What is Vantablack? Vantablack is a special coating made from millions of strands of carbon nanotubes (small hollow tubes), each of which is 3,500 times smaller than a human hair (about 20 nanometers). Vantablack is not a color, ink or pigment that can be mixed with other materials, Vantablack is a material that has physical characteristics of solid black and dark color. 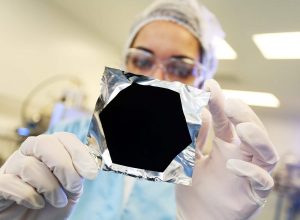 Vantablack when it was discovered in 2014 immediately became the blackest material in the world, but that record was broken by a new material that is said to be capable of absorbing light up to 99.96% (so if a light is cast on the Vantablack material, only 0.04% of the light reflects or is visible to the naked eye).

Why create material like this? many people wonder and think that this discovery does not bring any benefit to human life, but it turns out that materials like Vantablack are used to calibrate or measure the maximum capacity of NASA camera devices, NASA cameras are used to capturing images in outer space that are clear in low light, with the discovery of even darker material, NASA can easily calibrate its space camera without having to fly into space, but it can be done on Earth.

“Not only is there a PhD, but Azra is also Datuk Seri” – Azri Iskandar